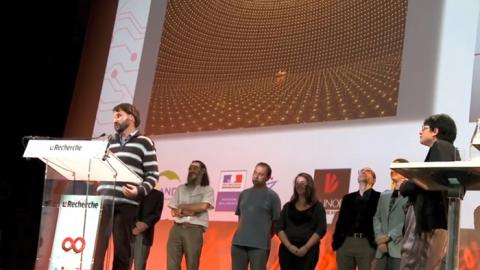 The Tokai-to-Kamiokande (T2K) collaboration was recently selected for high honours by the French magazine “La Recherche.”  The physics paper, titled "Indication of Electron Neutrino Appearance from an Accelerator-produced Off-axis Muon Neutrino Beam," was awarded "Le Prix la Recherche" by the La Recherche last month.  This prize celebrates the physics accomplishment (concerning the behavior of mysterious, subatomic neutrinos) and the clear, precise language of the paper. The paper was published in Physical Review Letters on July 18, 2011 (arXiv preprint).

"La Recherche" is one of the top popular science journals in France, for which some readers equate it to "Scientific American.” The T2K paper was selected by a 10-member committee of experts from different science fields, including mathematics, physics, and archeology.

According to a long-standing principle in physics, energy and momentum must be conserved.  In 1930, theoretical physicist Wolfgang Pauli tried to explain why there was a significant amount of missing energy in beta decay (a radioactive decay that emits an anti-electron), which seemed to violate the conservation of energy. He postulated the existence of an undetected particle. It was about 25 years later when the hypothesized particle was experimentally observed. Due to its chargeless nature, it hardly interacted with other particles of matter and thus the reason why it was difficult to detect. Scientists named the ghostly particle neutrino or Italian for “little neutral one.”

In the late 1960s, scientists found that the number of neutrinos arriving from the sun was approximately one third the number expected from the standard model of solar burning. For some thirty years this deficit remained unexplained and was termed the solar neutrino problem. According to the Standard Model, the neutrino was a massless particle that could come in three types, or scientifically known as “flavours.” Furthermore, unless the neutrino had mass, it was impossible for one kind of neutrino to transform into another. Finally in 1998, experiments at the neutrino observatory Super-Kamiokande in Japan showed that neutrinos could oscillate between the three types of flavors: electron, muon and tau. More convincing evidence arose when the Sudbury Neutrino Observatory (SNOLAB) in Canada detected all three flavours of neutrinos arriving from the sun. Together, the results rejected the massless nature of neutrinos and resolved the solar neutrino problem.

T2K is one of the largest international physics collaboration that aims to better understand neutrino oscillation parameters. A neutrino beamline, the near detector ND280, and the far detector Super-Kamiokande together compose the J-PARC accelerator. The accelerator generates an intense proton beam that collides with a target material, producing positive pions that will decay into antimuons and muon neutrinos. Canada has been an important player in the project through TRIUMF’s  contribution to T2K’s beamline, near detector, beamline monitoring and analysis. The experiment provided the first observation of the oscillation of muon-type neutrino to electron type neutrino, an essential piece of information to better understand the relationship between the flavors of one of the fundamental particles that make up our universe.

Congratulations to the T2K group!

-- by A. Guo, Communications Assistant