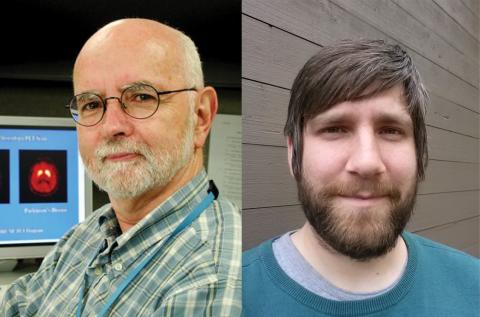 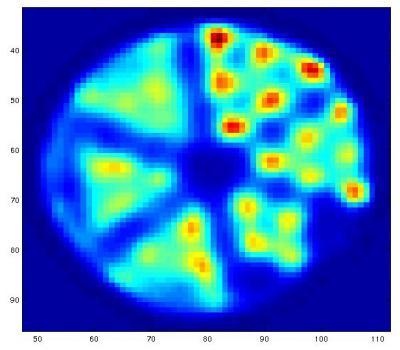 Dr. Tom Ruth and UVic Ph.D. student Jason Crawford have received a Canadian Cancer Society Innovation grant to support their research on Astatine-211, an alpha-emitting radioisotope which carries great potential for the treatment of late-stage cancer. The CCS Innovation grant was established to support unique and creative research that will have an impact on cancer treatment. Valued at nearly $200 000 over two years, the grant will fund two related investigations into the production and medical application of At-211 at TRIUMF.

Alpha-emitters such as At-211 are a choice method for treating tumours because alpha particles have a very short range and thus do not travel far in tissue, yet at the same time are extremely damaging. As a result, when the biomolecule containing At-211 is taken up by the tumour cell,the alpha particles emitted by At-211 destroy the cancer cells without damaging surrounding healthy tissue. At-211 is particularly promising in the treatment of micro-metastatic tumours (such as in the bone or blood) which are difficult or sometimes impossible to treat through other methods such as chemotherapy.

The therapeutic potential of At-211 was confirmed in the early 1980s in a study at Brookhaven Laboratory that Dr. Ruth himself was involved in. However, the pace of At-211 research has been limited by the difficulty of producing this isotope. Astatine-211 is usually produced by bombarding bismuth-209 with alpha particles from a cyclotron. However, there are no alpha-accelerating cyclotrons in Canada and only a handful in the US. When Ruth left Brookhaven to join TRIUMF, he faced this problem himself and, with no source for alpha particles, his research moved to other areas.

Two years ago, Jason Crawford, a Ph.D. student at the University of Victoria, approached Dr. Ruth with an interest in studying the dosimetry of At-211. Though Ruth was retired, his interest in astatine research induced him to embark on this project. Ruth and Crawford began to investigate a means of using TRIUMF's capabilities of rare-isotope production to address the production difficulties that impede At-211 research.

The solution Ruth and Crawford are pursuing is radon-211, an isotope already produced at the ISAC facility which decays to produce At-211. Radon-211's generous 15-hour half-life makes it feasible to capture and ship the isotope to other labs–at last providing a source for their own research. Partof the CCS Innovation grant will fund Ruth and Crawford's investigation into the infrastructure and logistics necessary to support At-211 production through radon. Though the ISAC facility cannot produce enough radon to support a large supply, the next stage may be to use the TRIUMF Neutron Facility to produce enough radon to supply 5-6 institutions with At-211 for research and early clinical trials. This has the potential to greatly impact the advancement of At-211 cancer treatment.

The CCS Innovation grant is also supporting an investigation into At-211's sister isotope At-209, a photon-emitter that can be used in SPECT imaging. Their interest in At-209 stems from its potential to visualize and quantify the targeting of astatine to tumours and possible uptake by healthy tissues.

Using one radioisotope to diagnose a tumour and another to treat it is not ideal, because the chemistry at work is different and thus researchers' ability to precisely measure the effectiveness of treatment is diminished. However, by using different isotopes of the same element (in this case, At-209 to image, and At-211 to treat), researchers have a much more accurate picture of how effective the treatment really is.

"It's comparing apples to apples – rather than apples to pears," explains Dr. Ruth.

Last year, Crawford and Ruth achieved a milestone by producing the world's first SPECT image using At-209. Now, the next step is to combine the At-209 with biomolecules, label them, and image their uptake in tumours using the VECTor camera at UBC's Centre for Comparative Medicine. This will form Crawford's PhD thesis. First, he will build on previous imaging success by refining the techniques to produce a better image. Next, he will monitor the uptake of these radiopharmaceuticals to determine whether they are taken up by the tumour preferentially. This work contributes to the development of At-209 as an imaging agent, which will greatly improve researchers' ability to predict and measure the effectiveness of At-211 cancer treatment in preclinical studies.

This project is supported by many members of TRIUMF's Nuclear Medicine team as well as the B.C. Cancer Agency. Dr. Scott Wilbur of the University of Washington has also greatly assisted the project by providing a unique cage molecule which ensures that the astatine remains attached to the biomolecule (a crucial mechanism, for without this the astatine would not be concentrated to tumour cells).

The results of Ruth and Crawford's research could mean new hope in the treatment of late-stage and difficult-to-locate cancers, one of the most challenging and under-addressed areas of cancer research. Congratulations to Ruth and Crawford upon the receipt of this grant!