A Medical Isotope First at ISAC 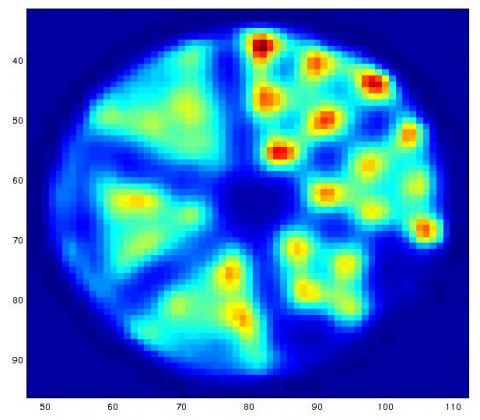 As part of a collaboration between TRIUMF's Nuclear Medicine and Accelerator Divisions this September, astatine-209 was successfully produced at TRIUMF's ISAC facility for the first time. The milestone event was orchestrated by UVic PhD student Jason Crawford, under supervision of Dr. Tom Ruth, for his investigation into the dosimetry of astatine-211 for use in cancer treatments.

Astatine-209 (At-209) is a gamma ray emitting isotope that has particular interest to researchers due to its potential to be used as a "theranostic" isotope- that is, an isotope that can be used to predict the effectiveness of targeted cancer treatments. In collaboration with TRIUMF's Accelerator and Science Divisions, enough At-209 was produced at ISAC to create a small handful of "phantom" images that indicate that the isotope can, in fact, be successfully imaged, a new asset for cancer therapy research.

ISAC is one of only a few places in the world that is able to produce large enough quantities of high purity At-209 to be able to be used in preclinical studies of astatine-based cancer treatment.

Jason noted that TRIUMF's Radiation Protection Group was instrumental in the planning process of this experiment, as medical isotopes had never before been recovered from ISAC using proton beams from the 520 MeV Cyclotron. Typically, radioisotopes for medical imaging studies are produced using the smaller 13 MeV cyclotron, located in the Meson Hall. Therefore, the use of ISAC for medicinal studies represents a new type of collaboration between the Accelerator and Nuclear Medicine Divisions to advance isotopes for science and medicine.

Additionally, Jason's study of astatine-209 using ISAC represents a significant step forward in being able to produce and study theranostic and therapeutic isotopes at TRIUMF. In particular, the Nuclear Medicine team is keen to use the information gleaned from having produced At-209 to be able to produce and study its sister isotope, astatine-211.

Already the project has garnered much interest from the international scientific and medical community, with potential for collaborations with researchers in Israel and Scotland. Congratulations to Jason and all collaborators!