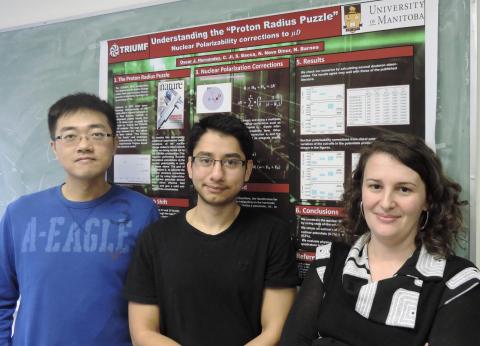 In physics there are fundamental quantities which have been so well measured for such a long time that they are considered “known” and will appear in all the textbooks. However, in the true spirit of science, there are always scientists seeking to improve these “known” quantities with new and improved techniques.  From  time to time these new and improved experiments show that maybe the “known’ quantity maybe wasn’t so well known after all.

The size of the proton is just such a quantity. The proton charge radius was considered “known” after decades of experiments of electron scattering on the proton and atomic spectroscopy on ordinary hydrogen. Then in 2010, the CREMA (Charge Radius Experiment with Muonic Atoms) collaboration at the PSI Laboratory in Switzerland ran experiments to measure the charge radii of light nuclei by measuring the so-called Lamb Shift when the atom’s electron was replaced by the heavier (and short-lived) muon.  The Lamb shift is the energy difference between certain atomic energy levels of the electron (or muon) orbiting around the nucleus. Since the muon is about 200 times heavier than electrons, it orbits much closer to the nucleus and so is much more sensitive to the size of the nucleus and its dynamics than is the electron. One of the nuclei the CREMA group studied was the simplest of them all – the proton.

To their surprise, they determined that the value of the proton charge radius [Nature, 466, 213 (2010)] differed by 7 standard deviations to the  “well known” value, meaning they estimate there is less than a 1-in-a-trillion chance that the result was a statistical fluke. It is a sensational result which has posed one of the most compelling questions of the new century: Is it an error? or is it a new discovery? There has been no shortage of attempts to explain the discrepancy, from beyond-the-Standard-Model theories, to re-analysis of the previous experiments to search for possible errors. To date, no commonly accepted explanation of the puzzle exists.

A TRIUMF theory team (see photo attached) together with Israeli collaborators is contributing to unraveling the mystery of the proton radius puzzle by calculating the so-called nuclear structure corrections in light muonic atoms.  Atomic nuclei are not point-like objects, but have a finite size and internal structure that actually can change the energy levels of the orbiting electron (or muon). Thus nuclear structure effects must be taken into account when analyzing spectroscopy results, such as those by the CREMA Collaboration.   Because it is extremely difficult to accurately obtain such information from experimental data, the TRIUMF nuclear theory team is providing a helping hand.

The team has published the first ab-initio calculations for muonic helium atoms (mu− 4He+) in the prestigious journal Physical Review Letters [http://journals.aps.org/prl/abstract/10.1103/PhysRevLett.111.143402] and new results on muonic deuterium (mu−D) recently appeared in the journal Physics Letters B [http://www.sciencedirect.com/science/article/pii/S0370269314005413]. For both nuclei, the TRIUMF group provided the most precise estimates of nuclear structure corrections to date. Using this information, experimentalists extracting the nuclear charge radii with muons will investigate whether the discrepancy with ordinary atoms (measured with electrons) persists or changes for atoms with different light nuclei. If no puzzle is found in muonic deuterium or 4He (meaning if results with muons were consistent with the electron scattering experiments), not only very stringent constraints will be put on theories beyond-the-Standard-Model which are trying to explain the proton radius puzzle, but also the investigation of nuclei with a different number of protons and neutrons, like 3He and 3H, will be crucial. The TRIUMF theory team is already hard at work generating the new results

-Prepared by M. Pavan, based on a report by S. Bacca

For more on the TRIUMF efforts: