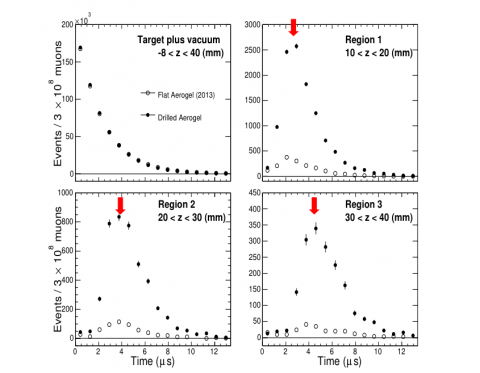 If something is worth doing, it is worth doing well. And if that something is an experiment hinting that the Standard Model of particle physics is incomplete, then it should be done well several times, just to be sure. A Japan-Canada collaboration have embraced that philosophy and have taken a big step towards retesting one of the most precise predictions in physics.

That prediction is of the so-called muon anomalous magnetic moment, dubbed g-2.   Produced in the debris of nuclear collisions, the muon is basically a short-lived higher-mass version of the electron. They behave like tiny bar magnets with strength proportional to the parameter g, which is exactly 2 in the absence of exotic "quantum vacuum" effects.  Using Quantum Electrodynamics, theorists have calculated these effects to extraordinary precision, so experiments that yield results significantly different could mean that theory is missing pieces, perhaps as yet undiscovered particles or forces.

The state-of-the-art muon g-2 measurement was performed at the Brookhaven National Laboratory (BNL) and published in 2006,  The Particle Data Group reports the difference between world-average experimental and theoretical results as 0.00000000288 +/- 0.00000000080, statistically a difference of 3.6 standard deviation (“3.6σ"), meaning it is estimated to have less than a 5 in 10000 chance of being just a statistical fluke.  That may seem a tiny chance to be a “fluky” result, but in particle physics, the standard of “discovery significance” is  5σ, or a 1 in 3,500,000 chance of a statistical fluke.

The tantalizing result has theorists worldwide speculating what "new physics" could explain the discrepancy, and experimentalists readying new experiments to check the result. The BNL technique required a 14m diameter magnetic muon-storage ring operating at a "magic energy” tuned to negate the effects of an electric focussing field essential to store the beam of muons produced with widespread energies.  Recently the storage ring was moved to the Fermi National Laboratory in Batavia, IL  where a new measurement plans a four-times smaller experimental uncertainty.  Half-way around the world, a competing group in Japan, with collaborators from TRIUMF and the University of Victoria, are planning their own measurement, but using a radical different technique.

The need for a large storage ring and “magic energy" tuning is eliminated if the muon beam can be produced at very low energy with a small energy spread, called "ultra-cold muons" (See top figure).  An experiment at the J-PARC laboratory in Japan proposes to store in a mere 0.66m diameter magnet ultra-cold muons produced by ionizing "muonium atoms",  a positive muon orbited by an electron. Since the muonium is created essentially at rest, the muons so-produced emerge ultra-cold. The smaller magnet and lower muon energy reduces a number of experimental effects that compromise the uncertainty in the BNL result. However, the problem is to create enough muonium initially to make the experiment viable.

Fortunately, a recent experiment at TRIUMF demonstrated that in fact viable amounts of muonium-generated ultra-cold muons could be produced.  Using positive muons from the M15 beamline, the collaboration created the muonium in wispy silica aerogel, out of which the muonium diffused and was subsequently detected when the muon decayed. The experiment's novel feature is that lasers ablated (burned) microscopic holes into the aerogel, which measurements showed increased muonium diffusion 10x more than non-ablated aerogel (see bottom figure). It was a very important result demonstrating that the J-PARC technique was competitive with the BNL/FermiLab g-2 experiment, creating a crucial 'second way' to help triple-check this important parameter. It also opens up other potential applications, like measuring the muon's electric dipole moment, and muon spin resonance in ultra-thin material layers (Muon Microscope). Their result was published in G.A. Beer et al. Prog. Theor. Exp. Phys. 2014 091 (2014).

Congratulations to the Japan-Canada g-2 team on their exciting result!