As part of the Beryllium Electron capture in Superconducting Tunnel junctions Experiment (BeEST), an international team that includes researchers from TRIUMF has published new measurements for the exclusion limits for sterile neutrinos. The findings, which improve upon previous work by an order of magnitude, were published last week in Physical Review Letters. 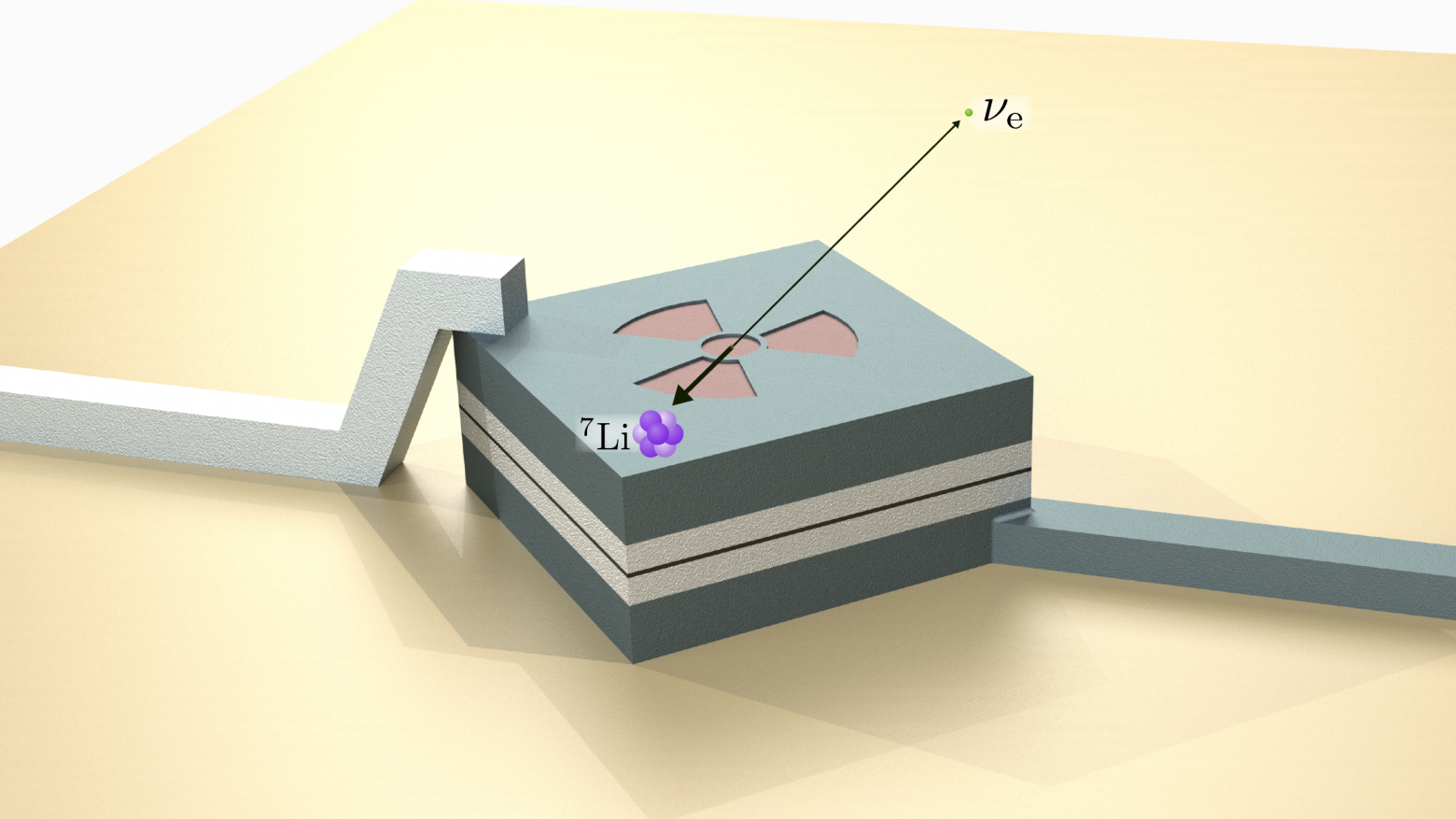 Sterile neutrinos interact with matter even more weakly than the already very weakly interacting ‘active’ neutrinos, a characteristic that makes them nearly impossible to detect using traditional methods. This elusiveness may make them prime candidates for dark matter – especially if we can observe the effects of their mass via momentum conservation in their interactions with Standard Model particles.

The BeEST experiment leverages high-rate quantum sensors to measure electron capture (EC) nuclear decay, a scenario where the final state contains only the neutrino and a recoiling atom. The experiment uses the decay-momentum reconstruction technique to precisely measure the beryllium-7 –> lithium-7 recoil energy spectrum in superconducting tunnel junctions (STJs). Specifically, the process involves implanting radioactive beryllium-7 atoms harvested from the TRIUMF-ISAC rare-isotope beam facility into the STJs before sending them to Lawrence Livermore National Laboratory in California for cooling and measurement. A full description of the technique can be found here.

The experiment utilized the ISAC Implantation Station (IIS), which was initially designed to produce high-uniformity implanted targets of long-lived radioisotopes such as sodium-22, aluminium-26 and beryllium-7 for astrophysics experiments; it is now regularly used for the production of heavy long-lived radioisotopes for medical physics studies. The TRIUMF team used their experience with the preparation and harvesting of such targets to implant the STJ detectors. The sample retrievals were performed in a radiation-controlled environment using strict safety procedures, in which the TRIUMF team has extensive experience.

"The ISAC facility at TRIUMF is a prolific producer of high-quality beryllium-7 beams – an isotope of perennial interest for astrophysics, the study of nuclear structure, and tests of fundamental interactions such as in the BeEST experiment," said Chris Ruiz, TRIUMF Department Head, Nuclear Physics. "With beams of more than a billion beryllium-7 atom per second, and the ability to vary the beam energy for different implantation depths, this was really a fortuitous teaming-up of the BeEST collaboration and TRIUMF. We're already looking forward to producing even higher intensity, cleaner beryllium-7 beams, which will enhance this experiment's sensitivity. Much of the credit also goes to the TRIUMF Targets & Ions Sources and Beam Delivery Groups for the excellent beryllium-7 production."

"With just a single sensor counting at a low rate for a month, we have already been able to search for a new type of subatomic particle in a mass range that has largely been unexplored in the lab," said Kyle G. Leach, assistant professor of physics at Colorado School of Mines and spokesperson for the BeEST experimental program.

With a measurement time of just 28 days using a single sensor, the data presented in the new paper excludes the existence of sterile neutrinos in the mass range of 100 to 850 keV down to a 0.01 percent level of mixing with the active neutrinos – better than all previous decay experiments in this range.

"Sterile neutrinos are a really exciting topic in cosmology and neutrino physics," said David McKeen, Research Scientist in TRIUMF's Theory Department. "They are a fantastic dark matter candidate and can tell us about how the active neutrinos get their tiny masses—so it was a no-brainer to take an active role in supporting the BeEST experiment. We’re also looking deeply into other neutrino properties that the BeEST can shed light on."

"This is really just the beginning for us, and although challenging, has been very enjoyable for everyone on our fantastic team," Leach said. "Our highly interdisciplinary collaboration of physicists and engineers from across the country and overseas are already working to scale up the experiment to large arrays of sensors with new superconducting materials for a significant increase in our ability to search for new physics. The contributions from TRIUMF have been essential for the success of our BeEST program, and the ongoing beam development at ISAC will help lead the experiment into the future."

The BeEST experiment is a multi-institution collaboration lead by the Colorado School of Mines and Lawrence Livermore National Laboratory (LLNL) in the U.S., with several key members from TRIUMF, and is supported by the U.S. DOE, LLNL, NSERC, and TRIUMF.

Read the full paper "Limits on the Existence of sub-MeV Sterile Neutrinos from the Decay of beryllium-7 in Superconducting Quantum Sensors".

Congratulations to the BeEST team!

(With contribution from the Colorado School of Mines web story)