The Future for IRIS is Bright 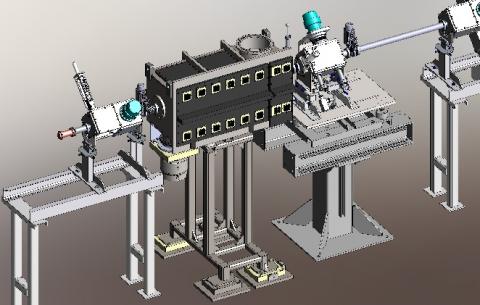 TRIUMF has been abuzz with activity as new projects get underway to expand our understanding of the fundamentals of our universe.   Key elements of this quest come from TRIUMF consortium-member universities. For instance, the IRIS project is being led by Saint Mary’s University in Halifax, Nova Scotia, and will add new capabilities to TRIUMF’s rare-isotope science program.

A joint project between Saint Mary’s, TRIUMF, and Japan, the ISAC Charged Particles Spectroscopy Station (IRIS) will be a project located in the ISAC-II experimental area, using the rare-isotope beams generated by the main cyclotron.  IRIS will use nuclear reactions as a microscope to look into the core of nuclear isotopes with large neutron to proton ratios, much the same way as we see objects around us by scattering photons (light) off them.  The purpose of the project is to explore how nature, with its strong nuclear interaction, binds and organizes neutrons and protons inside these rare isotopes, in an environment that is rich in neutrons.  IRIS will focus on isotopes in the universe that live for a short time which result in fast decay as they wish to reach a stable state.

One of the main challenges is producing sufficient quantities of these rare isotopes for experiments.  As isotopes become richer in neutrons, they become more difficult to produce.  In order to take full advantage of these rare isotopes at TRIUMF, scientists have to develop new techniques to enhance their scope of study.  IRIS is attempting to pioneer the use of a thin frozen sheet of hydrogen as the reaction target, which will allow for higher probability of interactions.

A key development will be another detector known as the low-pressure ionization chamber for detecting what elements the incoming beam is composed of – setting the TRIUMF facility at the forefronts as no other Isotope Separation On-Line (ISOL) facilities have this capability. IRIS will use silicon semiconductor wafers and cesium-iodide crystals to detect the scattering particles to form a snapshot of the nuclear interior.  This will allow scientists to discover new and unexpected features that were inaccessible with stable nuclear isotopes. This may change our century-old view of shell structure of nuclei and the underlying nuclear interactions, such as how and why neutrons form pairs like pairs of electrons in superconductors. All of these features govern how nature creates most of the matter that we see around us today. The rare isotopes provide scientists with laboratory access of neutron-rich environments in our universe.

Professor Rituparna Kanungo at Saint Mary’s University leads the IRIS project, which is supported by the Canada Foundation for Innovation and the Nova Scotia Research and Innovation Trust. IRIS is also supported by TRIUMF for detector development, technical and engineering resources and Japan is contributing to the target.  Construction for the IRIS project has begun, with commissioning aimed for next year.  The basic layout of the vacuum chambers has been completed; along with a large amount of the necessary detector parts have been obtained.  TRIUMF and Saint Mary’s have been focusing on the design and construction of the main apparatus, with our partners in Japan working on the hydrogen gas target.  Its basic structure has been completed, leading to vigorous testing. The scientific collaboration of IRIS involves Saint Mary’s University, Simon Fraser University, University of Guelph, McMaster University, TRIUMF and Research Center for Nuclear Physics, Japan.