With Newton’s apples appearing in the TRIUMF roundabout and the race to the community volleyball championship cup underway, summer remains in full swing at TRIUMF – which means it’s time to check in with this year’s awardees of the Erich Vogt First Year Summer Research Experience (FYSRE).

TRIUMF is pleased to introduce University of British Columbia (UBC) students Jenny Zhu, Cyrus Young, and Michael Liudeng. We sat down with each of them to talk about their work and where they’re heading next: 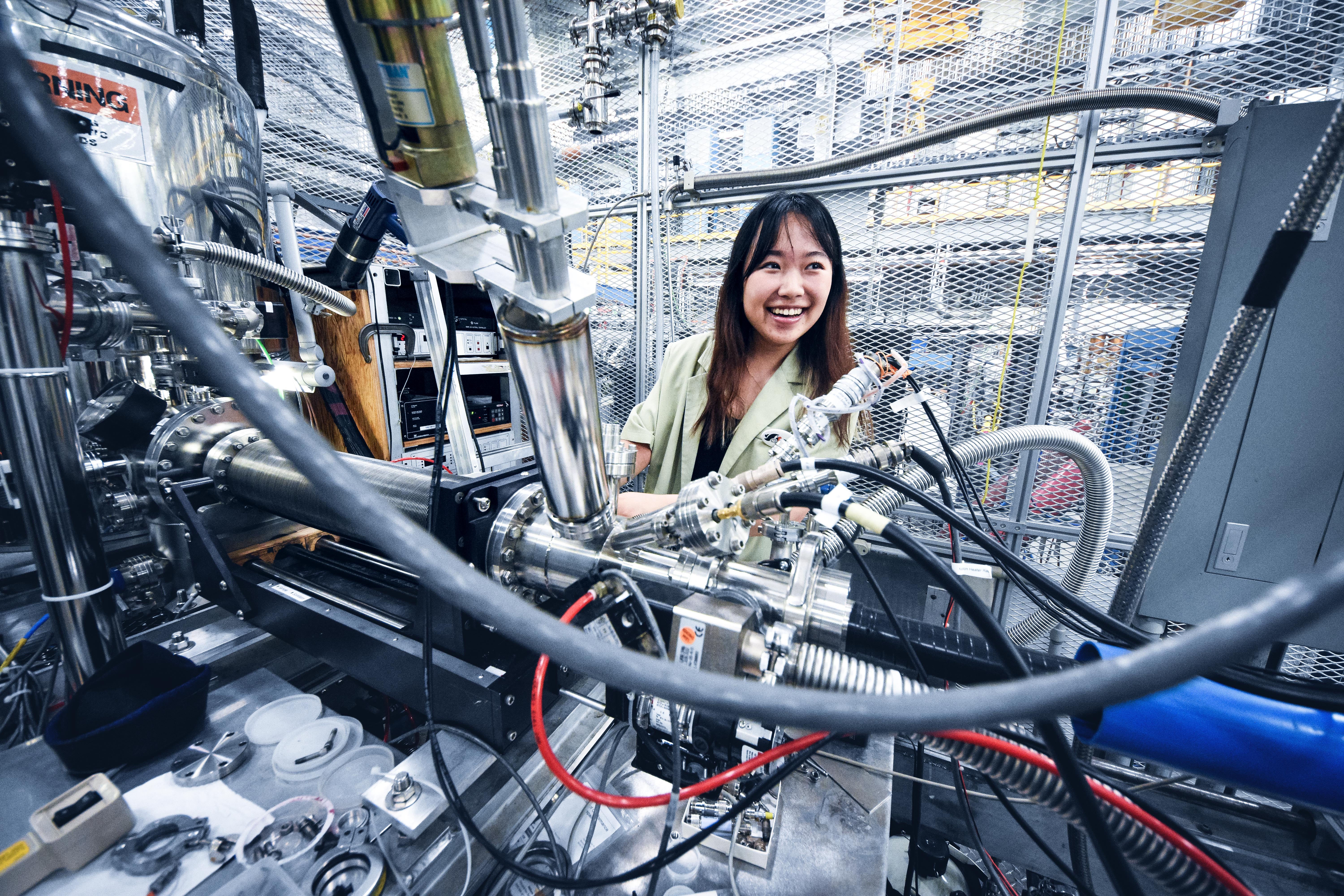 Yuruo Jenny Zhu’s time at TRIUMF has included work on research on liquid cells (under UHV) for TRIUMF’s beta-detected NMR (b-NMR) program and shadowing members of the ultracold neutron (UCN) group and their work on canary testing and finding proportionality between magnetic fields and temperature for the fluxgate. She is an international student pursuing a combined major in Physics and Computer Science:

“TRIUMF has been the place I have looked up to since the day I realized I wanted to go into physics, and my summer experience at the lab has made me even more certain about going into research. The excitement that I get when I finally make the tiniest progress in my project (for example, getting data that finally makes sense!) is worth all the effort and frustration. Participating in beamtime was my favorite part: I learned how to run experiments and many other applications to bNMR.”

“When FYSRE gave me the opportunity to work at TRIUMF with only first-year physics knowledge, I was nervous about not having the right skills or understanding, but now I realize that many things we do can be broken down into fundamental physics principles. I ask tons of questions every day, and everyone here is approachable and willing to explain everything to me. I am gaining hands-on research experience and learning science knowledge all at the same time. I am hoping to go to graduate school and do more research in the future.” 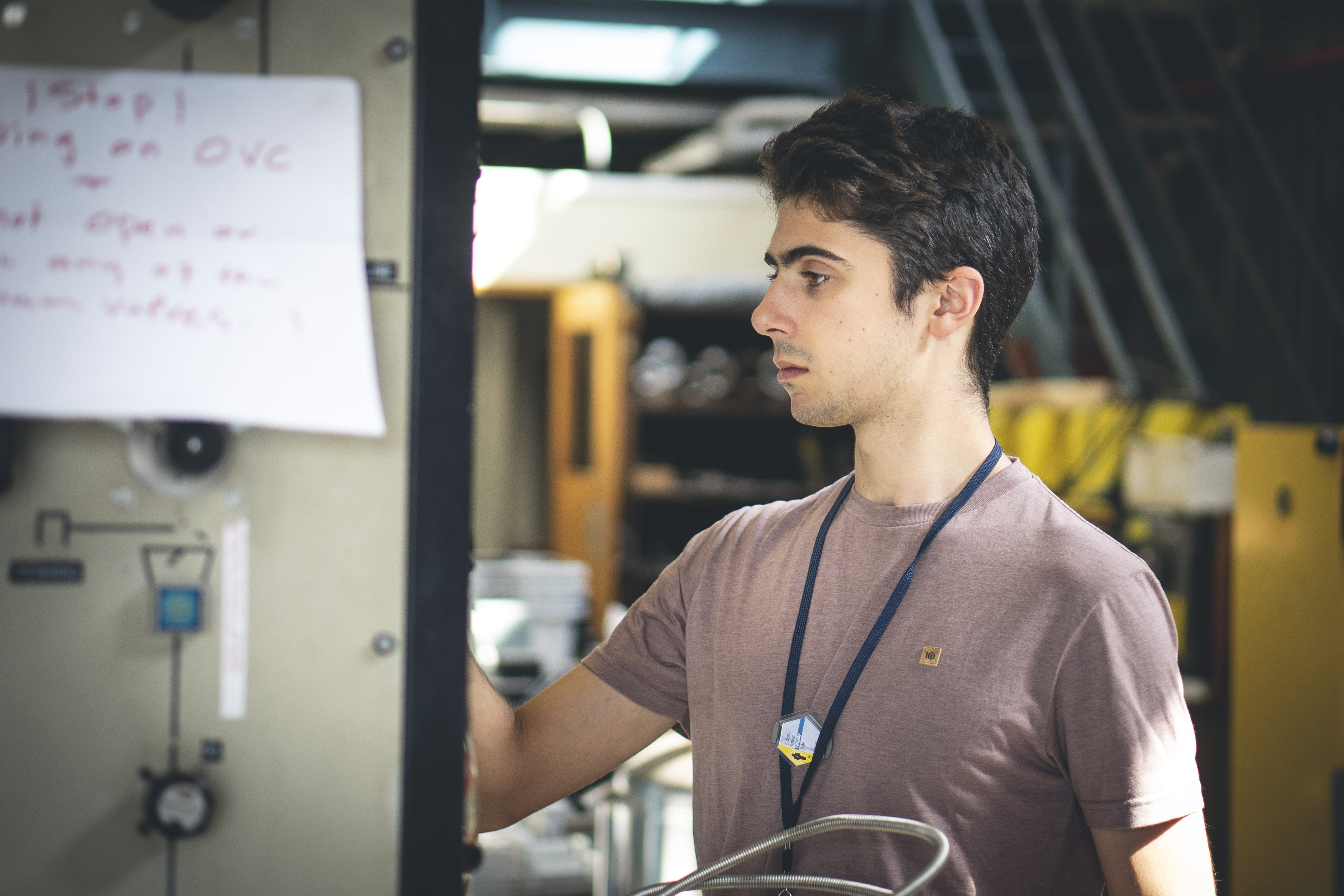 (image: Young at work in the M15 beamline area)

Cyrus Young is an engineering physics student working with the Centre for Molecular and Materials Science team on muon spin spectroscopy.

“The bulk of my work is doing simulations and data analysis for a series of beamline experiments involving firing a muon beam at a target and simulating the results of the experiment. The muons will decay into positrons, and using positron detectors around the target, we can use the data to learn more about muons. I also had the opportunity to co-author a paper with my supervisor, Dr. Kenji Kojima, for a conference on muon spin rotation, relaxation, and resonance, in which we came up with an algorithm to analytically calculate the trajectory of a positron in a magnetic field and ran simulations testing the accuracy of the algorithm.”

“My favorite thing about TRIUMF is the scientific freedom. There are multiple different projects (within the field of study of the department that I joined) that I can work on. There are also weekly seminars by scientists regarding cutting edge research on a myriad of disciplines. My supervisor also created a really fun, supportive environment in which we would often go out for social events with visiting collaborators. It’s still very early in my studies to figure out what exactly I want to do, but if I had to say I would think I am likely to pursue a career in the applied physics sector, possibly in the areas of photonics or the development of quantum technologies.” 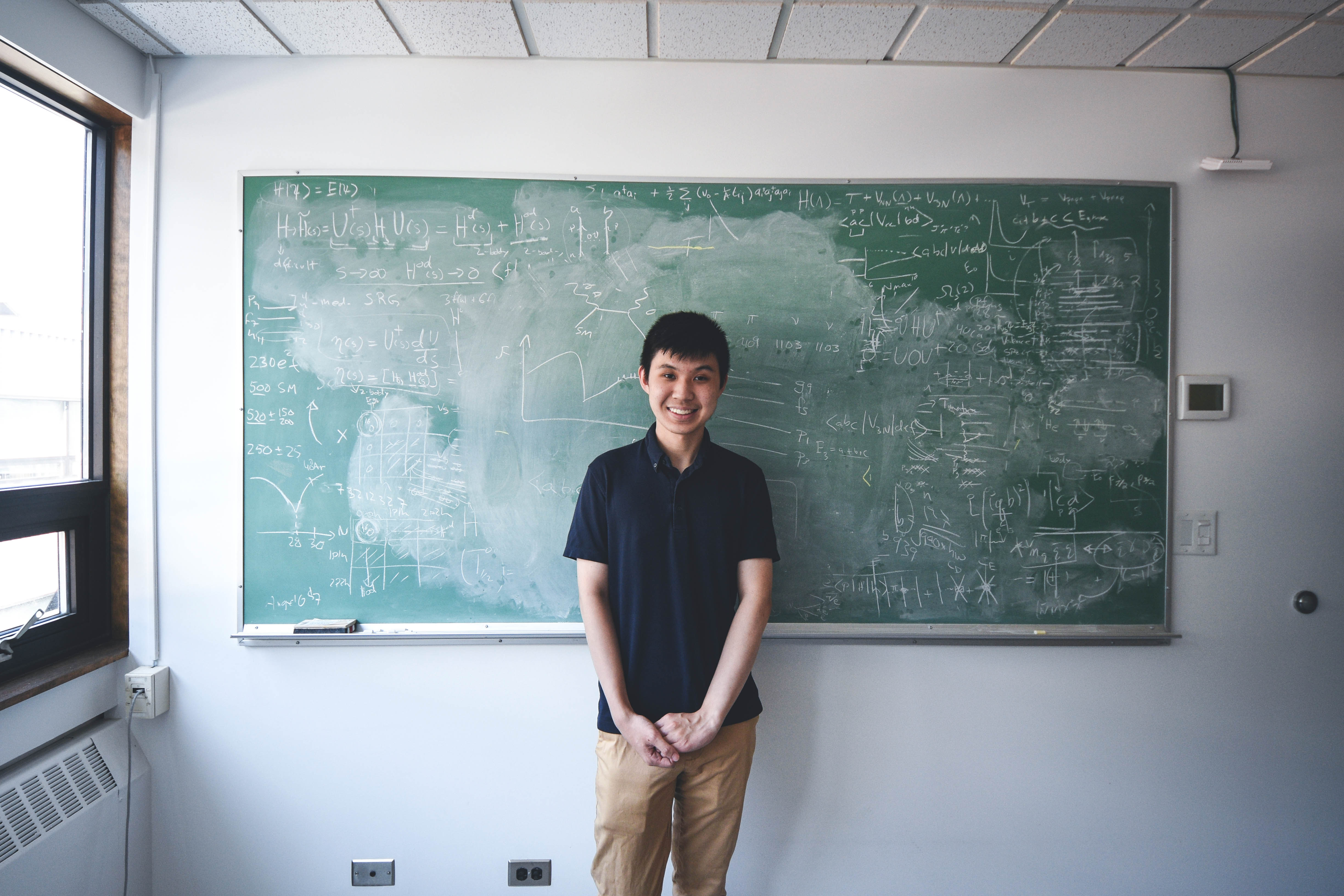 (image: Liudeng in front of a chalkboard in the Theory wing, MOB)

Michael Liudeng just finished his first year at UBC and is seeking to double-major in Math and Physics moving forward. He works with PhD student Antoine Belley in TRIUMF's Theory Department.

“At TRIUMF, I’m working on first-principles calculations of the nuclear matrix element for two-neutrino double beta decays, a quantity related to decay rates and half-lives. Two-neutrino double beta decay is a rare weak process in which two neutrons simultaneously decay into two protons, electrons, and electron antineutrinos. While this process in itself is interesting, being the rarest decay ever observed, the main motivation of my work is to understand its correlation with a hypothetical beyond-Standard Model process called neutrinoless double beta decay: using existing data on the two-neutrino decay (and the fact that its mechanisms are simpler and well-understood), we can hopefully refine our double beta decay calculations in general. Most of my work involved computing these matrix elements for two isotopes where the two-neutrino version of the decay has been observed, with the hope that these calculations can guide experimental searches for the neutrinoless decay in the same isotopes.”

“Looking forward, I’d like to continue doing research as a full-time career in academia or industry. It seems like there’s a lot of really interesting stuff going on that I can hopefully contribute to if I spend some more time in research. I have a lot of fun doing physics in general, so I’d like to explore related fields as well.”

The FYSRE program honours Dr. Erich Vogt (1929-2014), a TRIUMF co-founder and one of the most distinguished Canadian nuclear physicists of his generation. Eric’s wish was to be able to provide accomplished first-year UBC students with the same research opportunities as their upper-year peers. The FYSRE program enables these outstanding first-year students to gain hands-on research experience and work alongside scientists on different teams and projects at TRIUMF.

Administered by the University of British Columbia’s Department of Physics and Astronomy (UBC PHAS), the FYSRE award was first offered in 2014 and has funded valuable hands-on experiences for a variety of students since its inception.