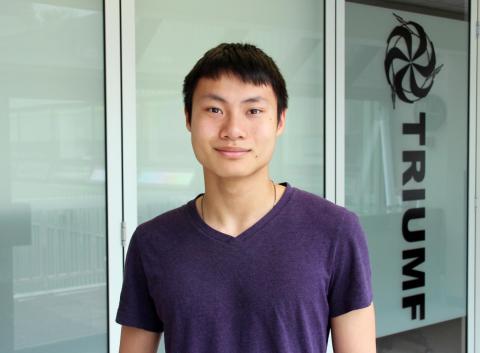 Jonathan Zhang, an 18-year old aspiring theoretical physicist, just finished his first year of undergraduate studies at UBC Sciences, when he got the chance to do something that most students don't have the chance to do until later in their career: collaborate with theoretical research scientists at TRIUMF.

Jonathan was awarded the Erich Vogt First Year Student Research Experience (FYSRE) fellowship, which gives outstanding first year students hands-on experience on a summer research project here at TRIUMF. The award aims to apply their knowledge and ignite their passion for physics. Administered by the UBC Department of Physics and Astronomy (PHAS), this is the second year that the FYSRE has been offered, and the first where a second student (Zhang) was placed at TRIUMF.

The award honours Dr. Erich Vogt (1929-2014), one of TRIUMF’s co-founders and one of the most distinguished Canadian nuclear physicists of his generation. Vogt was a passionate teacher who consistently garnered the highest student evaluations until his teaching retirement at age 80. His wish was that top first-year students be afforded the same research opportunities as higher-year students who have readier access to such opportunities.

According to Jonathan, the Erich Vogt fellowship is a unique experience for first years that allows you to explore your true interests and has helped him understand what it is like to be a theoretical physicist.

“It’s a very open, very fun environment where you learn a lot,” he explained. “Often, I notice that physicists in the Theory Department will go and talk to each other and discuss new theories and new ideas. I find it really cool how they all collaborate together and come up with better ideas. It’s also really cool to see how physicists - nuclear and particle physicists and even between theory and experiment - will learn about not just their own field, but also get experience in all the other fields.”

Explaining what attracted him to the field, Jonathan said “There are hard set rules where you can actually be extremely precise with everything and that is what I like about physics.” In his eyes, physics is the best science due to its logical nature.

Jonathan spent his high school career participating in physics contests and the annual UBC PHAS Physics Olympics. Coming from a well-rounded science education background through UBC’s Science One program, he plans to major in combined honours for math and physics before pursuing a career in theoretical particle physics.

“Before this experience, I was worried theoretical physics would be a little bit boring. It is a lot more fun than I expected because it’s not just doing math. It’s actually learning new things all the time and getting that exposure to different things and coming up with new and creative ideas.”

His four months spent as a research student in the Theory Department involved getting both a physics education and research experience. During his first months at TRIUMF, Jonathan focused on learning about quantum mechanics and higher-level mathematics.

“I’ve been very impressed by Jonathan,” says David Morissey, TRIUMF particle physics theorist. “He went from first year undergraduate physics to doing things that graduate students and physics PhD students would be working on as part of their research. He has come up to speed quickly on quantum mechanics, vector calculus, and particle physics. Even a bit of quantum field theory.”

At the end Jonathan worked on finding ways to help find the Higgs boson.

“I ran simulations for particle collisions at the LHC at CERN, doing collisions to simulate some physics relating to the Higgs boson to see if there’s any way that we could test for its presence.”

Morrissey is very proud of how hard his protégé has worked: “I think the work he’s done, the progress he’s made, and the things he’s learned was a good example of what the Erich Vogt was designed for. I think Erich would have been very happy to see this and just the progress he’s made and a bright future scientist.”