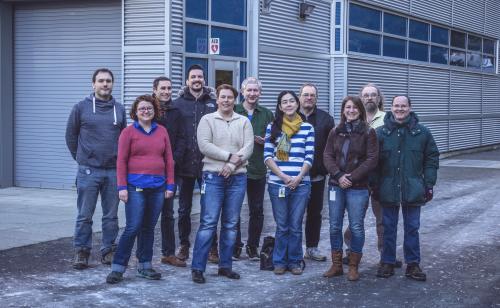 Rare-Isotope Beam Science is pursued by the Nuclear Physics Department

There is a worldwide renaissance in nuclear science, driven by new and unexpected experimental results from improved experimental techniques, theoretical breakthroughs, and expanded applications.

On the experimental side, two major milestones have advanced the research: large arrays of detectors with extraordinary data-collecting power, and accelerator facilities which provide experimental access to intense mass-selected (isotope-selected) beams with lifetimes down to the microsecond scale. The combination of these two capabilities marks a unique, major advance in nuclear physics that has not been seen in a number of decades.

“What is the structure of nuclear matter?” is a central question that touches upon many different areas. The central goal of nuclear physics is to explain the properties of nucleons, nuclei, and nuclear matter. Ultimately, it is desirable to attain this goal, starting from an understanding of the nucleon-nucleon interaction based on the fundamental theory of quantum chromodynamics. Indeed, considerable progress is being made in this direction with the development of ab initio methods, a more sophisticated understanding of the nucleon-nucleon interaction, and the application of advanced many-body techniques to nuclear physics. But connecting the fundamental theory to the nucleon-nucleon interaction poses a severe challenge, and the complexity of the strongly interacting many-body system requires that the study of detailed properties of nuclei rely on both ab initio calculations and more phenomenological models for the foreseeable future.

Nuclear astrophysics brings together the latest developments in astronomy and theoretical and experimental nuclear physics in a quest to understand the origins and evolution of all the naturally occurring chemical elements in the universe, without which the world as we know it would not exist. Nuclear astrophysics requires an intimate knowledge of the inner workings of stars, particularly either those that die in energetic explosions such as supernovae or undergo cataclysmic thermonuclear blasts, such as novae and X-ray bursts. All the chemical elements except the very light hydrogen, helium, and lithium were created in nucleosynthesis processes in hot stellar environments such as stars, novae, and supernovae. The underlying processes that govern the evolution of these objects are the interactions between atoms, and the microscopic properties of individual nuclei.

One of the great challenges in science is to explain the amount of matter we see around us. Evidence for some kind of Big Bang is overwhelming, but any cosmological model using the physics that we presently know produces a photon-to-baryon ratio much higher than the billion-to-one ratio observed. To correct the discrepancy requires processes that create a larger matter-to-antimatter asymmetry. The discovery and subsequent measurement of electric dipole moments (EDMs) potentially provides an experimental tool to constrain theoretical models that address this issue.

The world around us is governed by a series of fundamental laws and symmetries. The standard model has provided a precise framework for calculation and prediction, the results of which agree with experimental data remarkably well. Many extensions to the standard model have been proposed. TRIUMF has a long history of performing high-precision experiments that both test the standard model of particles and forces and look for physics beyond it. In recent years, this testing has centred on different aspects of the charged weak current as measured in the first generation of particles in nuclear beta decay.