IRIS provides a glimpse of deformation in helium-8 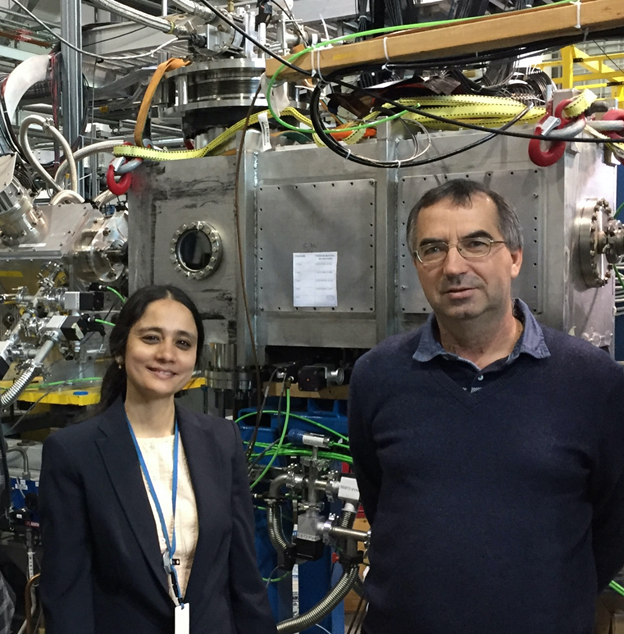 New TRIUMF research from the Saint Mary’s University-led IRIS group has unveiled an unexpected shape deformation in the nucleus of helium-8, providing further insight into the unique dynamics of how neutron-rich nuclei take shape and maintain stability.

Published on November 10, 2021 in Physical Letters B, Proton inelastic scattering reveals deformation in helium-8 combines high-precision and high-statistics experimental data gathered with the IRIS spectroscopy station -and ab initio theoretical calculations undertaken by TRIUMF’s Theory Department to demonstrate a significant deformation in the arrangement of outer neutrons in helium-8.

With a magic number of protons, two, and a presumed neutron subshell, helium-8 has been predicted to be double closed-shell and therefore is expected to be spherical following conventional rules. The results point to deeper nuclear interactions at play and open a new paradigm for future investigations.

The way in which atoms assemble and behave depends in part on how their protons and neutrons (together: ‘nucleons’) bind together in the nucleus – their atomic structure. Atomic structure gives rise to matter itself and influences many of matter’s physical and chemical properties. Our research into nuclear structure has helped us build the nuclear shell model, which is the leading framework for describing the atomic nucleus.

In the nuclear shell model, nucleons are arranged in the nucleus based on energy levels, or shells, in a manner that is analogous to the way electrons are arranged in orbitals. Once a proton or neutron shell fills (or ‘closes’; a shell ‘closure’), the nucleus’ binding energy increases, as does the amount of energy required to excite it to its next energy state.

Balance, too, is key, and adding a disproportionate number of protons or neutrons seems to push nuclei towards instability. The boundaries of this instability are called driplines, murky drop-off points beyond which nuclei become unable to bind neutrons and protons, ‘dripping’ them away through neutron or proton decay. However, shell closures (which are generally observed at 2, 8, 20, 28, 50, 82, or 126 of either proton or neutron numbers) seem to anchor the nucleus partway along the decay drop-off, creating regions of stability that have important implications for our matter universe. Researchers call these species ‘magic’ nuclei.

“Magic nuclei and nuclear shells shape much of our visible matter. Nuclear shells are important pillars in our construction of nuclear theory and influence the behaviour of the nuclear isotopes,” said Rituparna Kanungo, Professor of Physics at Saint Mary's University, TRIUMF Affiliate Scientist, and IRIS lead. “In fact, when we look skywards, up and out into the universe, we see that the nuclear shell model is imprinted in nature, embedded in the reaction rates and products of nucleosynthesis in stars and stellar explosions. The abundances and ratios of elements that we see in the cosmos is a direct result of the rules that govern the stability of nuclei.”

Determining with precision the rules that govern the binding of atomic nuclei, especially for those that are rich in neutrons (including many of the heavier elements that we see in stellar events and on Earth), remains an important frontier in nuclear physics. Due to its implications for reaction rates and pathways, and decay rates, a full understanding of the nuclear shell structure is critical for helping us understand element synthesis in the neutron-rich regions of the nuclear chart. This is especially pertinent for the r-process, which contributes to the various nuclear reactions responsible for the atomic nuclei heavier than iron.

An unexpected deformation in helium-8

One neutron-rich isotope that has long been the focus of both theoretical and experimental physicists is helium-8, an isotope of helium made up of 2 protons and 6 neutrons.

With the highest neutron-to-proton ratio (3:1) of any matter that can be produced on Earth, helium-8 exists somewhat precariously at the edge of the neutron dripline (beyond helium-8 is helium-10, which, while technically ‘doubly magic’ with 2 protons and 8 neutrons, is far too unstable to exist).

Though it decays with a half-life of about 1/10th of a second, helium-8 is comparatively stable, and in fact has been shown to hold its outer neutrons more tightly than the lighter helium-6, suggesting that its neutrons may be configured in a way that imparts stability – not a full shell closure but a presumed ‘subshell’ of 6 neutrons. If this were the case, helium-8 would behave in a manner similar to a ‘double closed-shell' nucleus. Since all double closed-shell nuclei have been shown to have spherical nuclei, one way to assess the neutron shell arrangement in helium-8 is to ask: is it spherical?

Led by Matthias Holl, IRIS post-doctoral research fellow, and Kanungo (Principal Investigator of the paper), the experimental team used the IRIS spectroscopy station to study helium-8 using proton inelastic scattering, an experimental technique that involves smashing a stationary target (made of small nuclei, like the proton in hydrogen) with an incoming beam made up of the isotope in question. The created products and their scatter pattern together provide the equivalent of an energy fingerprint — a complex, highly distinctive indicator of the isotope’s nuclear structure, particularly the location of outer protons and neutrons.

In this experiment, the team used a beam of +2 charged helium-8 at 8.25AMeV, produced using TRIUMF’s 520 MeV cyclotron and impinged on an IRIS-pioneered solid hydrogen target cooled to 4 degrees Kelvin.

In the IRIS results, the team recorded a first excited energy state for helium-8 at 3.54(6) MeV – a large energy gap that supports the notion of a closed subshell at 6 neutrons. Further, the team measured the scattering probability for different scattering angles, finding that the shape and magnitude of the probability distribution pointed to a significant quadrupole deformation parameter (a measure of how lopsided the nucleus is). A spherical nucleus has a deformation parameter of β =0; the β value for helium-8 was found to be 0.40.

The high-precision IRIS data were also found to agree with first principles predictions that were pursued independently by Petr Navratil, TRIUMF Theory Department Head and acting Associate Laboratory Director, Physical Sciences Division, whose research focuses on using ab initio techniques to explore nuclear structure and reactions. The theoretical predictions and the data consistency represent precise evidence of such a shape deformation in helium-8, pointing to a rugby ball-shaped shell of neutrons surrounding a sphere of protons.

Synthesis of all state-of-the-art components, experiment, and theory led to a remarkable agreement and hence the firm finding of deformation.

“Our theoretical calculations provide an important validation of the experimental results, also indicating a significant neutron deformation in helium-8,” said Navratil. “Further, we received additional validation from work performed by colleagues at Oak Ridge National Laboratory, Lawrence Livermore National Laboratory, the University of Seville, and the University of Tennessee. I am particularly grateful to our co-author Gaute Hagen, TRIUMF Affiliate Scientist at Oak Ridge, for his work, which brought us similar results using alternative and unique methodologies.” 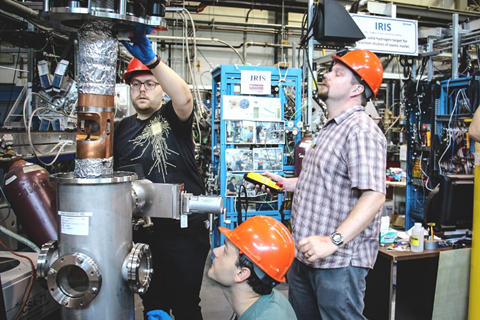 “Here at TRIUMF, we can leverage the laboratory’s world-leading capacity to produce a variety of intense rare isotope beams, including helium-8,” said Kanungo. “But we also have the tremendous advantage of having access to a community of highly-qualified experimental and theoretical physicists, engineers, technicians, and others, and the unique infrastructure of IRIS, which allows us to investigate short-lived, exotic nuclei with high precision.”

“These results are an important building block for our understanding of nuclear shell dynamics and the nature of matter,” said TRIUMF Deputy Director, Research Reiner Kruecken, who was also an author on the paper. “Further, the synergy between theory and experiment achieved here is a prime example of how TRIUMF can bring together world-leading infrastructure, talent, and a network of academic and experimental collaborators to produce excellent science. Our congratulations to all involved.”

Congratulations to the IRIS and Theory teams!