Today, the CERN-based ALPHA (Anti-hydrogen Laser Physics Apparatus) collaboration announced the world’s first laser-based manipulation of antimatter, leveraging a made-in-Canada laser system to cool a sample of antimatter down to near absolute zero. The achievement, detailed in an article published today and featured on the cover of the journal Nature, will significantly alter the landscape of antimatter research and advance the next generation of experiments. 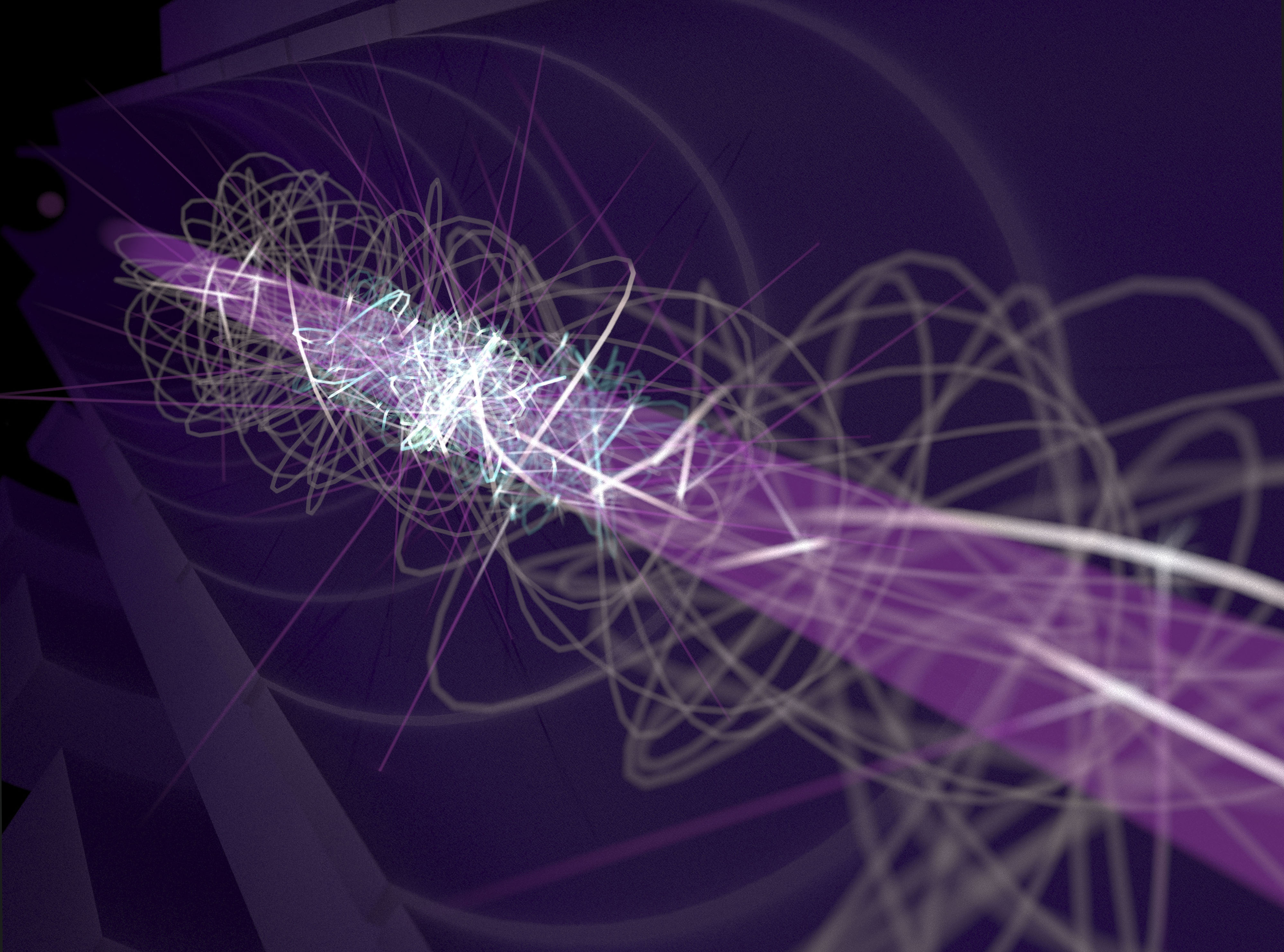 (image: an artistic rendering of the movement of an antihydrogen atom in the ALPHA magnetic trap, before and after laser cooling [in grey before, and blue after] The images show various lengths of the antihydrogen tracks. Credit: Chukman So/TRIUMF)

“Today’s results are the culmination of a years-long program of research and engineering, conducted at UBC but supported by partners from across the country,” said Takamasa Momose, the University of British Columbia (UBC) researcher with ALPHA’s Canadian team (ALPHA-Canada) who led the development of the laser. “With this technique, we can address long-standing mysteries like: ‘How does antimatter respond to gravity? Can antimatter help us understand symmetries in physics?’. These answers may fundamentally alter our understanding of our Universe.”

Antimatter is the otherworldly counterpart to matter; it exhibits near-identical characteristics and behaviours but has opposite charge. Because they annihilate upon contact with matter, antimatter atoms are exceptionally difficult to create and control in our world and had never before been manipulated with a laser.

“It was a bit of crazy dream to manipulate antimatter with laser,” said Makoto Fujiwara, ALPHA-Canada spokesperson, TRIUMF scientist, and the original proponent of the laser cooling idea. “I am thrilled that our dream has finally come true as a result of tremendous teamwork of both Canadian and international scientists.”

Since its introduction 40 years ago, laser manipulation and cooling of ordinary atoms have revolutionized modern atomic physics and enabled several Nobel-winning experiments. The results in Nature mark the first instance of scientists applying these techniques to antimatter.

By cooling antimatter, researchers will be able to perform a variety of precision tests to further investigate the characteristics of antimatter, including experiments that may shine a light on the fundamental symmetries of our Universe. These tests could offer clues as to why the Universe is made primarily of matter and not equal parts matter/antimatter as predicted by Big Bang models.

The successful laser cooling also opens the door to a variety of leading-edge physics innovations. Momose and Fujiwara are now leading a new Canadian project, dubbed HAICU, to develop new quantum techniques for antimatter studies. “My next dream is to make a “fountain” of anti-atoms by tossing the laser-cooled antimatter into free space. If realized, it would enable an entirely new class of quantum measurements that were previously unthinkable,” said Fujiwara. “Furthermore, we are one step closer to being able to manufacture the world's first antimatter molecules by joining anti-atoms together using our laser manipulation technology,” said Momose.

The results mark a major success for ALPHA-Canada, the Canadian contingent that makes up about one-third of the wider ALPHA collaboration, and contributors the University of Victoria and BCIT. As lead institution for ALPHA-Canada, TRIUMF has spearheaded collaborative efforts on several key experimental technologies and analyses, including the upgraded ALPHA-2 cryostat that enabled the first laser spectroscopic measurements of antimatter and the design and fabrication of the detector apparatus for ALPHA-g, the experiment that will determine the effect of gravity on antimatter.

After creating and trapping antihydrogen for a world-record one thousand seconds in 2011, the ALPHA collaboration’s achievements have included providing a first glimpse of the antihydrogen spectrum in 2012, setting guardrails confining the effect of gravity on antimatter in 2013, and showcasing an antimatter counterpart to a key spectroscopic phenomenon in 2020.

The laser cooling achievement leveraged the work of many across the TRIUMF community: postdoctoral researchers Rob Collister, Alex Khramov, Daniel Siveira; Chukman So contributed on the analysis of the cooling measurement; co-op students Alexandre Thilbeault and Matt Grant contributed as part of the laser team. Further, Andrea Capra, Joseph McKenna, Art Olin, David Gill, Konstantin Olchanski, and Leonid Kurchaninov contributed to antihydrogen detector and its analyses; Cam Marshall and Rob Thompson (University of Calgary) worked on the ALPHA-2 cryostat; and Art Olin co-led the physics analysis of the spectroscopy measurement.

The Canadian contributions are detailed in a joint TRIUMF-UBC release here. Read more about the Nature publication here.